Born in 1973 in Tanjung Karang, Lampung, Indonesia, Andy Dewantoro graduated from Bandung Institute of Technology (ITB) in 2000 with a degree in Interior Design. He currently lives and works in Indonesia.
While his earlier works tended towards abstraction, it was during his residency in Europe that Dewantoro was strongly influenced by the Romantic landscapes of 19th century visionaries William Turner and John Constable, initiating the development of his own cinematic landscape paintings. His monochromatic palettes of mostly black, purple, white, and grey, lend his paintings an enigmatic quality. Abandoned houses, churches, and bridges viewed at a distance appear like fading memories through the misty filter he creates. Dewantoro has since expanded his colour palette to include brighter, earthier tones, but maintains his focus on the landscape, a mixture of urban elements and the natural environment decidedly void of human presence, heightening the sense of drama they evoke.
Dewantoro’s work has been exhibited throughout Indonesia, and around the world, including in Malaysia, South Korea, Hong Kong, Singapore, England, the Netherlands, and Romania. Some of his previous solo exhibitions include Half Full Half Empty (2011), Valentine Willie Fine Art, Kuala Lumpur, Malaysia; Empty-space-landscapes (2010) Galeri Semarang, Semarang, Indonesia; and Silent World (2008), Ark Galerie, Jakarta, Indonesia. 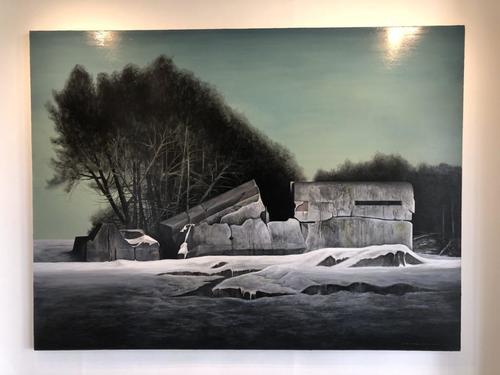