PAMOR : The Power from Nature

Press Works Programs
This exhibition wants to show Toni Kanwa Adikusumah particular approach to meteorite material. Toni Kanwa's toothpick-sized primitive human statues are usually made with wood material, embodying a distinctive method of creation. Wood is a material that can “instantly” receive an artistic touch as a vehicle or a consequence of the artist's spiritual “search” process. Meteorites, as metallic materials, require more complex handling through several stages. Toni Kanwa's meteorit statues are created through a wrought technique that are usually applied in the creation of blades. Pamor is then present as a stroke on the blade (usually keris) that appears due to the mixing of two different metal materials. The pamor’s patterns and motifs which then marks the aesthetic value on the keris blade as an artist trace of an empu (keris maker)

Toni Kanwa realizes the artist’s position as an empu in the roots of tradition. An empu is usually aware of his position as part of nature and trained to hear its voices. Toni Kanwa's works are the impact of surrendering process to the nature’s work. In other words, the creation of his works are consequences of a trained intuition or intimate dialogue with natural materials.

Toni Kanwa Adikusumah was born in 1959 in Tasikmalaya. In 1979 he studied at the Faculty of Art and Design at the Institut Teknologi Bandung, Indonesia. From his youth, he traveled throughout the archipelago to learn the knowledge and practice of art and rituals of various indigenous cultures of Borneo, Sumbawa, Papua, Nias and other regions. This experience gave him an in-depth understanding of indigenous traditional culture and produced the physical and mental order that shaped his artistic practice. Since 2000 he has traveled the world deepening the universal character of his art practices and knowledge. He has presented his works and performances in Indonesia, Belgium, France, the United States and Singapore. 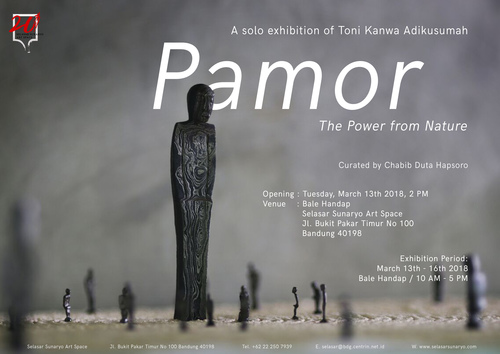