Residency Exhibition by Zen Teh

This exhibition is a presentation of a 2-month residency project by Zen Teh in Bandung. An artist based in Singapore, Teh’s photography-based works are a result of an interdisciplinary investigation of Bandung’s human-landscape interaction. Teh’s practice considers how nature exists within and outside the Anthropocene. The age of human is a short period within the earth’s existence, which nonetheless has been responsible for much environmental degradation under existing political-economic systems that exert demands on the land and its natural resources.
One of Teh’s most important work is a series of “photographic sculptures” Garden State of Palimpsest, where photographic images are incorporated on the surfaces of architectural debris and factory excess stone from Singapore. The images are speculated images of natural environment around kampong areas in Singapore which has been transformed to urban housings, skyscrapers, etc. This particular series of work is a commentary towards the urban development policies which often prioritise site developments for economic growth.

During her residency in Bandung, Teh studied Bandung’s geomorphology and construction sites around Northern Bandung, highlighting existing tensions between the will for economic growth versus the sustainability of the residents’ living environment. This exhibition involves interdisciplinary collaborations with Made Ananta (local research collaborator) and Aldiansyah Waluyo (documentary videographer), Hera (art writer and researcher), and Rinaldi Ikhram (geologist), thus emphasising the subject of human-landscape interactions as a multifaceted pursuit.

Zen Teh (born and works in Singapore, 1988) is an artist and educator whose art-making and research interest is rooted in the relationship between man and the natural world. Teh’s works have been exhibited in numerous exhibitions, both solo and group show such as the National Museum of Singapore, Singapore Art Museum and Art Science Museum in Singapore. Teh has also been exhibiting her works abroad in Thailand, Korea, Taiwan, Hong Kong and China. She has been invited as a guest speaker in regional environmental conferences such as the ASEAN Powershift 2015 and Hanoi Innovation Week 2016 on Sustainability. Teh is also the winner of 7th France+Singapore Photographics Art Award.
Residency and exhibition of Zen Teh are supported by National Arts Council Singapore, and Mizuma Gallery Singapore.
Opening
Jan 18th, 12:0am - Mar 31st, 12:0am, 2019
Artist Talk
Jan 18th, 12:0am - Mar 31st, 12:0am, 2019

Exhibition walkthrough with curator Chabib Duta Hapsoro.
Let's get to know Zen Teh's residency process and her ideas behind the exhibited works.

Exhibition walkthrough with curator Chabib Duta Hapsoro and geologist Rinaldi Ikhram.
Let's get to know how geologists were involved behind Zen Teh's research in Bandung, and how the geological process and phenomenon affected her work. 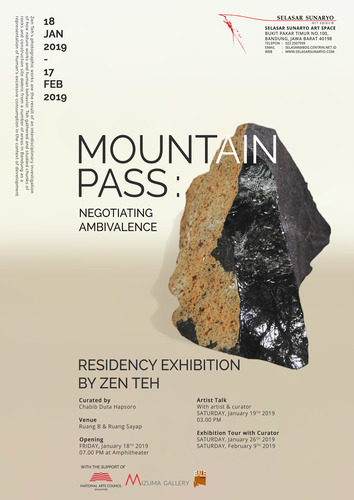